With demographic shift of populations in the developed world, the treatment of Diminished Ovarian Reserve (DOR), Premature Ovarian Failure (POF) and Premature Menopause (PM) assume increasing clinical importance. (DHEA) has been reported to improve pregnancy chances with DOR, and POF.

Whenever the question is whether own eggs can be used or if an egg donation is needed, the ovarian reserve of the women needs to be determined. The aging of the ovaries is the most common cause of ovulatory problems. 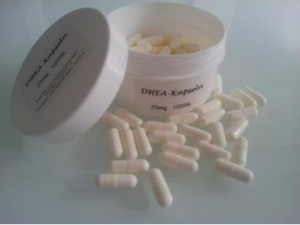 So that, when a woman starts to lose follicular quality, it may be necessary to use the DHEA supplementation to achieve genetically healthy and mature eggs.

Why do we talk about the follicle and not the eggs?

A follicle (derived from the Latin word for nest) is essentially an egg sack. Basically, the egg matures inside of the follicle, and when a woman ovulates, the egg is released from the follicle. A high follicle amount just indicates that a woman is not having a problem producing eggs. Just because a woman has follicles in the ovary does not always mean that the eggs are of good enough quality to give a baby. So if a woman shows to be a follicular low responder, DHEA may help to rejuvenate the follicular function.

DHEA (Dehydroepiandrosterone) is a naturally occurring hormone produced primarily by the adrenal gland. DHEA levels peak in early adulthood and decline with age. DHEA is used by our bodies to produce estrogen and testosterone – the major female and male sex hormones

The administration of DHEA prior to ovarian stimulation would seem to be very helpful, giving an improvement in both quality and quantity. Studies have found that DHEA revitalizes the ovarian environment in which eggs mature, resulting in:

Positive side effects of DHEA

I. Improved overall feeling.
II. Feelings of improved physical strength, mental acuity, and memory.
III. Improve sex drive.
IV. A hydration, e.g. the improvement of the production of sebum (the oily substance which allows the skin to maintain its flexibility).
V. High stimulation of the immune system, which strengthens resistance to disease.
VI. Improvement of bone tissues.

It is important to know that:

– Supplemental DHEA should not be used in individuals with a history of sex-hormone-dependent malignancy, such as prostate, breast, or endometrial cancer.

– There are reports of mild elevations in serum transaminase levels, which may occur within a few weeks after initiation of DHEA. This effect has either been reversed when the drug was discontinued or has regressed after a few weeks of DHEA use.

– Other milder adverse effects include an increase in perspiration and body hair – especially facial, axillary, and pubic hair.

The general dose of DHEA is 75mg daily, which is split into three 25mg doses (to avoid the development of an upset stomach) for a maximum of 5 months, but a minimum of 2 months.

The treatment is usually started at least 8 weeks prior to ovarian stimulation and then continued until the pregnancy test.

This website uses cookies to improve your experience while you navigate through the website. Out of these, the cookies that are categorized as necessary are stored on your browser as they are essential for the working of basic functionalities of the website. We also use third-party cookies that help us analyze and understand how you use this website. These cookies will be stored in your browser only with your consent. You also have the option to opt-out of these cookies. But opting out of some of these cookies may affect your browsing experience.
Necessary immer aktiv
Necessary cookies are absolutely essential for the website to function properly. These cookies ensure basic functionalities and security features of the website, anonymously.
Functional
Functional cookies help to perform certain functionalities like sharing the content of the website on social media platforms, collect feedbacks, and other third-party features.
Performance
Performance cookies are used to understand and analyze the key performance indexes of the website which helps in delivering a better user experience for the visitors.
Analytics
Analytical cookies are used to understand how visitors interact with the website. These cookies help provide information on metrics the number of visitors, bounce rate, traffic source, etc.
Advertisement
Advertisement cookies are used to provide visitors with relevant ads and marketing campaigns. These cookies track visitors across websites and collect information to provide customized ads.
Others
Other uncategorized cookies are those that are being analyzed and have not been classified into a category as yet.
SPEICHERN & AKZEPTIEREN